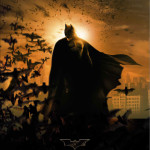 There were several versions of the Batman Begins (2005) poster being used both as teasers and elsewhere. The Christopher Nolan film starring Christian Bale, Michael Caine, Liam Neeson, Katie Holmes, Gary Oldman and Morgan Freeman was the first of the trilogy that ended with The Dark Knight Rises (2012) Here's one … END_OF_DOCUMENT_TOKEN_TO_BE_REPLACED