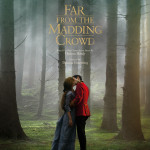 "Far from the Madding Crowd" will be released on May 1st 2015. The movie, which is an adaptation of the Thomas Hardy novel of the same name, will star Carey Mulligan, Matthias Schoenaerts, Michael Sheen, Tom Sturridge, and Juno Temple. It's directed by Thomas Vinterberg. Hers's some of the poster artwork that has been made available to date: … END_OF_DOCUMENT_TOKEN_TO_BE_REPLACED